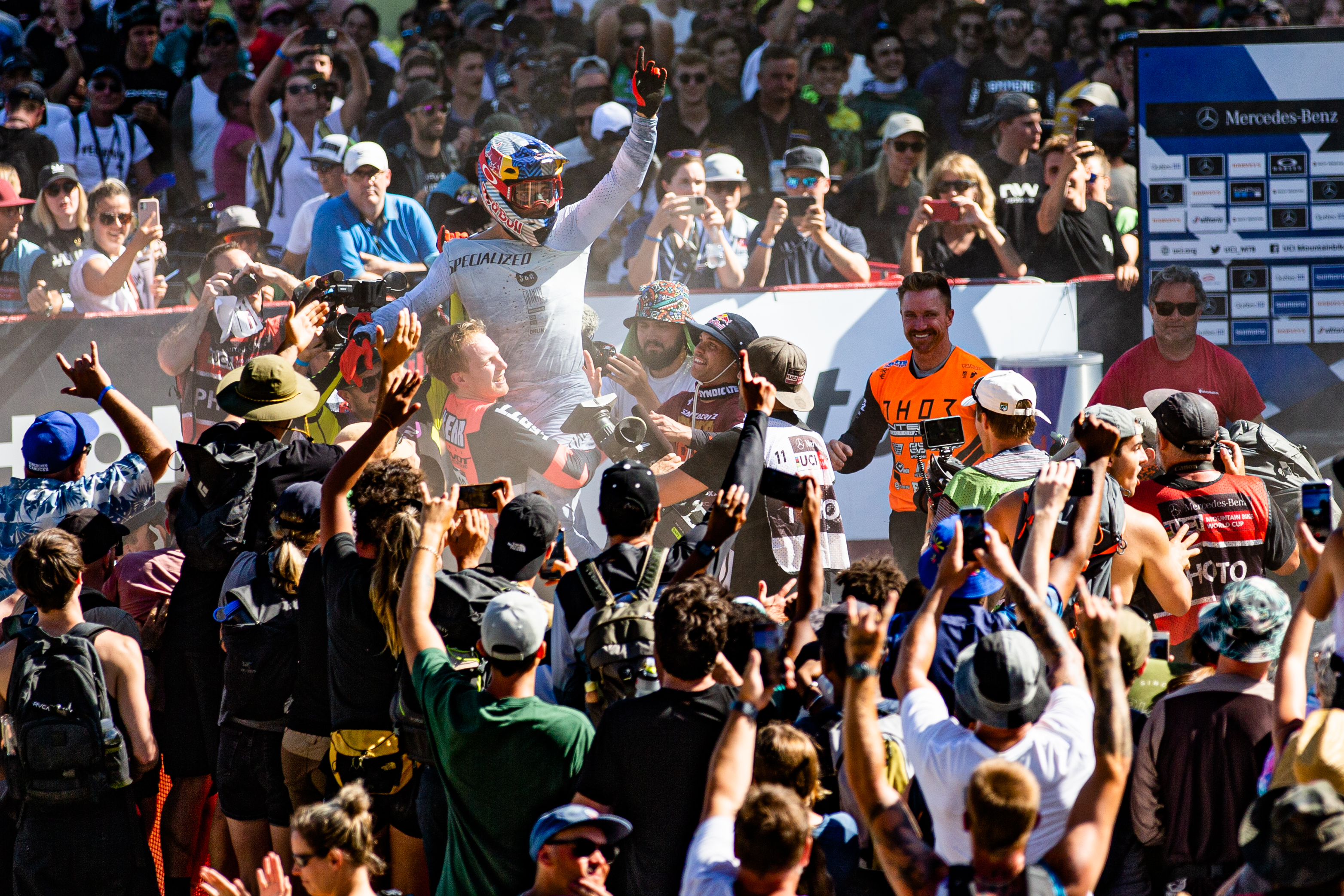 Green at the first split; second split; third… each update punctuated by an exponentially louder roar from the crowd. It was a deafening cacophony erupting from the amphitheater, fueled by a genuine love for the sport, unfettered love of a rider, and above all, a racer on the cusp of a genuinely historic moment. During my full-time years on the World Cup circuit, I don’t recall anything like Finn Isle’s Finals run at Mont Sainte Anne – some moments were close; Gwin at Windham and MSA, Matt Walker and Adam Brayton at Fort William, Rachel Atherton every time she hit a milestone win, Loic Bruni’s World Champs win in Andorra… there are other moments without a doubt, but August 6th, 2022 sits at the top for me.

Fastest Qualifier and Last Man Down The Hill at his home race, Finn had the weight of a nation, friends, family, and a passed mentor on his shoulders. It was good pressure, but decidedly daunting without a doubt. I had him as my favored rider to win, as he has been so, so close this year to the “W”. From day one, there was something else in his riding, call it deeply inspired and focused on a level few people will ever know in their lifetimes. The madness was compounded by the fact that Finn lost his chain with about 25 seconds to go in his run, leaving him unable to pedal entirely. Showing amazing composure and a don’t-quit-now attitude, he seems to will his bike to just. keep. going; Crossing the line into 1st for his first win, in front of his home crowd… unreal.

A three-year hiatus from the beloved mountain in Quebec brought out the fans in droves, or hordes more like, as there were a claimed 40,000 people in attendance; the energy in the air supports that claim. I can’t imagine many people had fully-functional vocal cords come Sunday. Witnessing a paradigm shift in the sport in person is awe-inspiring. It was a privilege to be present and document the momentous occasion. Seeing the unbridled elation from Finn, his team, competitors, and the swarm of fans had me holding back some happy tears, even now as I type this, the afternoon lives fresh in my mind and I can’t help but well up a bit.

To go from top-Junior into Elites with the expectations to win is nothing short of burdensome. Success takes time as the adage goes, but everyone, including the Elite Men’s winner, likely imagined the first win happening sooner. For it to all come together on home soil after a mildly turbulent start to an Elite career is just sublime. There are endless cliches that could be spouted off about Finn’s efforts and reward, but all that comes to mind for me are grit and determination. On Saturday, a generational hero was born for Canadian kids, following in the footsteps of one of the greats, the late Stevie Smith – an iconic and legendary individual whose presence is felt to this day.

Adding to the importance and excitement of the weekend, Junior phenom and friend of Finn, Jackson Goldstone took the win and secured the overall title in front of his home crowd. An accomplishment not overshadowed by Finn’s success, but only adding to it in the most storied fashion possible. The charismatic kid is showing that the Elite ranks are where he wants to be, having times that would podium in the next tier of racing. Amazing.

Continuing the theme of the up-and-comers making a mark, Gracey Hemstreet took to the podium at home as well in 3rd and defended the Leaders jersey heading into the last round with a 25-point lead. The hard-charging redhead is a first-year Junior and already making waves with exceptional composure and consistency in her riding. Joining the Elite and Junior men in their accolades at the legendary venue really cemented the notion that Canada is now producing DH racers who are contending for greatness.

MSA in 2022 still has all of us shaking our heads at the level of racing across the board. One of the roughest iterations of the track in years bolstered by hot and sunny weather made for one helluva show from the first rider to leave the start gate. In my eyes, this race was a new high water mark for edge-of-seat racing; a weekend to write home about, performances to idolize, and sportsmanship to commend. I was privileged to bear witness to such exemplary racing.