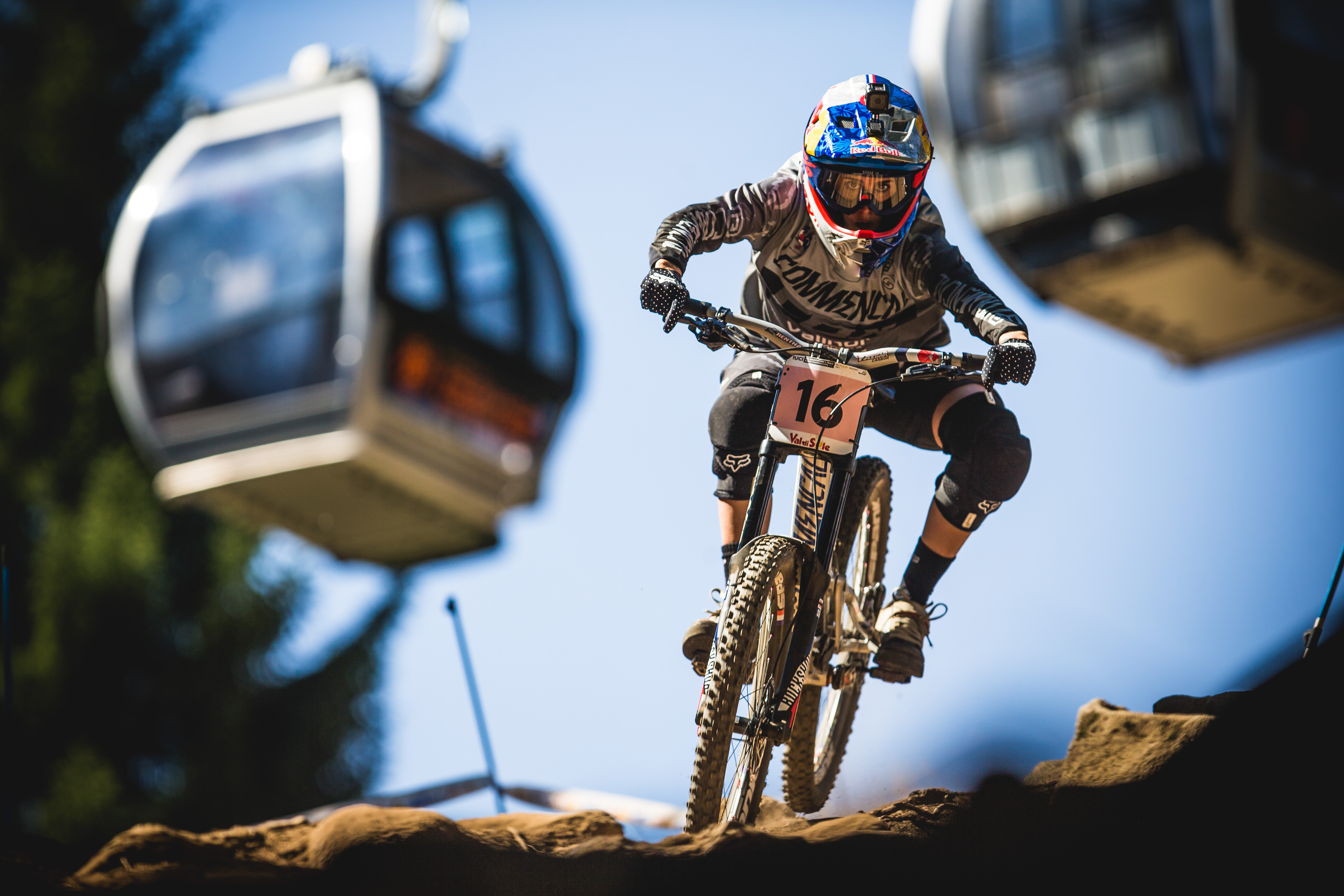 The anticipation was palpable, as the Juniors and Women boarded the gondola and made their way to the start hut.  With the sun bearing down with authority at 9am, we all knew it was going to be a hot one too.  Within the first two runs, rocks appeared like mushrooms after a rain, and bikes were quickly being turned from “out of the box new” to “selling for parts” condition.  No one was turning up the speed dial though, as there is a long week ahead of riding, with three days of practice leading into Finals on Sunday.

When the Elite Men dropped in, the course was already churned into a fine brown powder; a lot less tasty than Nesquick.  The sneaky holes, hidden wheel eating rocks and roots, and fading light made the afternoon practice session particularly hectic.  It wasn’t possible to gauge who was really going for it though, as riders were pulling up at every junction, just trying to get the hang of the track, section by section.

With Day 2 upon us, it will be interesting to see what sort of cheeky line choices get tested out, and who is going to start showing their cards with speed.  Drop in below to check out some of the action from the first practice session:

(Don’t forget, you can selection and photo to then scroll through the rest like a slideshow.)

Well…maybe not “normal”, but Tahnee Seagrave certainly konws how to have a laugh; “I can cross my eyes really well too…” “Yes – do that!”

Miriam Nicole dancing through the rocks with gondolas swinging by in the background – it looks like a scene out of Indiana Jones! She’s looking comfortable on the rough steeps, and it without a doubt gunning for the top step.

I’m pretty sure Elliot Heap was riding straight onto the lift at the bottom, because everytime I turned around, he was coming down the track again. This is his kind of track, and I think he is the underdog contender for the win.

The best number and a whole of roost [insert name] on one.

Tracey Hannah is here to win, and that’s it. She has been close all year to the top step, and on a big, fast track, she is a definite threat for the win.

Rachel Atherton, paparazzi/job stealer. She actually knows what she is going with Sven’s camera, and had some bangers tucked away on the memory card.

Matt Walker is back at it this weekend after sitting Andorra out on his own accord to make sure he was 100% for World Champs. Matt is a smart dude, and has a bright career ahead of him.

A new, quiet bike and a black kit, Nik Nesteroff was stealth as can been in practice. Some how, I manage a shot.

When the best of the best are all riding the same track, there isn’t much mystery about where the fast lines are, so you get some interesting ruts and huge holes forming from all of the consisten abuse.

Gaetan Vige knows how to hang off the back of a bike and let it run wild – he’s the top threat for the top spot.

Three race wins in a row, Danny Hart wants to make it four, and add a seconds set of rainbows to the list. Eyes forward, focused on the task.

Finn Iles was the favored Junior to take the stripes this weekend. However, a big crash saw him getting carried off the hill. Reportedly, he’s ok, nothing serious – but it remains to be seen if he’ll be able to race.

This is becoming too common of a sight for my liking…

All eyes are on Rachel Atherton here in Italy.

Remi Thirion has been riding the track in sections, but we can see he’s flying, even if it’s only briefly…drifting it into a compression, he’s not holding back.

Jack of all trades, Tony Seagrave makes some wardrobe adjustements for his team riders.

The look on John Parkin’s face in the background says it all: Brendan Fairclough is pushing hard.

Don’t let the shapes fool you, Henry Fitzgerald looked calm and collected as he smashed by each run. We could see a surprise result from him here on this monster track.

All of the hours of work that went into the custom builds and livery designs for this event were quickly undone by the unforgiving track.

People forget that the athletes are normal people, they just happen to have really cool jobs (and amazing riding skills)…

This is for you Paul Haysom; Matt Delmore, doing what he does best.

He floats when he rides, and it’s a sight to see. Laurie Greenland spent a lot of time watching from different perches along the track – he’s not missing a beat.

Today Neko Mullaly looked his best on a bike all year. When the going gets rough, he gets stoked – look out.

Broing out with Eliot Jackson, Neko Mullaly, and Rob Parkin.

Swinging off the back and sending it deep, Manon Carpenter is keeping it smooth and steady, making sure to ramp up her speed through out the week in order to peak for race day.

The weapon gets stashed away for the night, left to rest, fore the day ahead will only be more brutal than the one before.

The vail of uncertainty in racing is ever-present, but it was literally present today as riders were blinded by dust coulds in the dark woods. Somehow, Oscar Harnstrom mananged this curtain call and kept on charging.

There are so many loose rocks on track, that it’s like they are a solid surface…watch your wheels!

Georga Astle looked like she was having a fair big of fun riding today, and was in high spirits when we chatted later in the day.

You would not know Loic Bruni missed most of the season. On point, all day.

Looking particularly composed on track, Brook MacDonald was riding steady on line all day. With three days of practice, riders have more time to be methodical in their approach to the days preceeding the race.

It was hot today, and making the most of each run mattered. Rupter Chapman hiked this section twice (second time after this shot) to dial in the rock gap to looker’s left. He greased it, and then he took lunch!

Clever – the impact zone on Tahnee’s pedals were left polished in anticipation that they’d find some hidden treasure(s).

You could easily tell what kind of day Troy Brosnan was having: all white, all right; dirt-stained, in pain. He kept everything looking fresh though, and is on the hunt after the weather robbed him of the chance to try for the win in Andorra.

Winning practice is perhaps what Adam Brayton used to be known for…however, he is quickly redefining himself in 2016 by still getting after it in practice, by unleashing the Full Kestral out of the gate when the time is on. VDS is a place he excels, and he’s made his point that he’s here to hammer.

World Champs has a different pace to the week, and it seemed riders were taking things a little more seriously, though slowly. Connor Fearon was practicing with teammate Josh Button, but spent a good portion of the day riding solo.

Down for the count, Finn Iles seemed more irritated than injured as he was carried past us. “I crash, and then my neck sort of hurt, and now I’m on a backboard…” No chances taken around here.

Joe Bowman gets some words from “retired” Steve Peat, who is a course sweeper this weekend…no one really expected him to quick outright, did they?