The track is in ruins, and it’s only the second day of riding.  Foot inspection was almost more common than riding for the first hour of each practice session.  Assessing the damage to the lines and corners was crucial to keeping the rubber side down and not ending up caked and choked out in dust.  Sitting around in the dirt taking photos meant the rest of us non-riders had no choice but to cough and wheeze our way through the day.

Riders started to unleash more race-oriented line choice and gaps, testing the limits of traction and support offered by the brown powder, and which lines offered the best over/under on speed and longevity; What is fast in the morning, may very well not be in the afternoon.  And on a track that changes so much hour-to-hour, this race will favor those who can think quickly and adjust on the fly.

Providing us all with a strong display of, “How Not To Do It”, Max Scharf of Canada switched ground for sky and sky for ground.

High five? No? Alia Marcelini getting up close and personal with the tree pads in the early morning light. 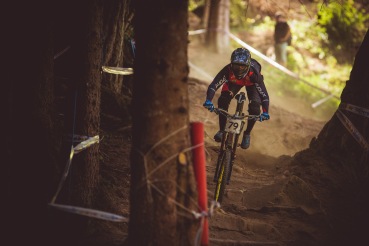 It must be something in the water, but the Brazillian team is one wild bunch of dudes; Lucas Eduardo Alves De Borba getting rowdy. 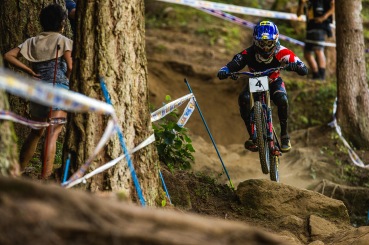 Danny Hart was one of the fastest riders through this section. He’s the pick for a fair few people to take the win on Sunday. 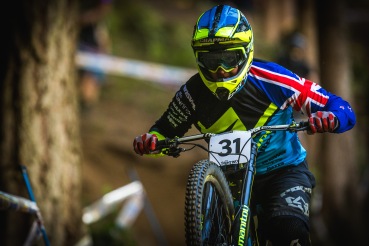 Rupert Chapman is still laughing and poking fun as usual, but on course, it’s all business this weekend.

He’s been around for ages, but Markolf Berchtold of Brazil doesn’t seem to be slowing down in the least. 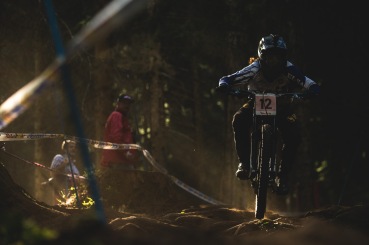 To say it was dark in the woods would be a gross understatement. Miriam Nicole perhaps wishes her GoPro was a headlamp. 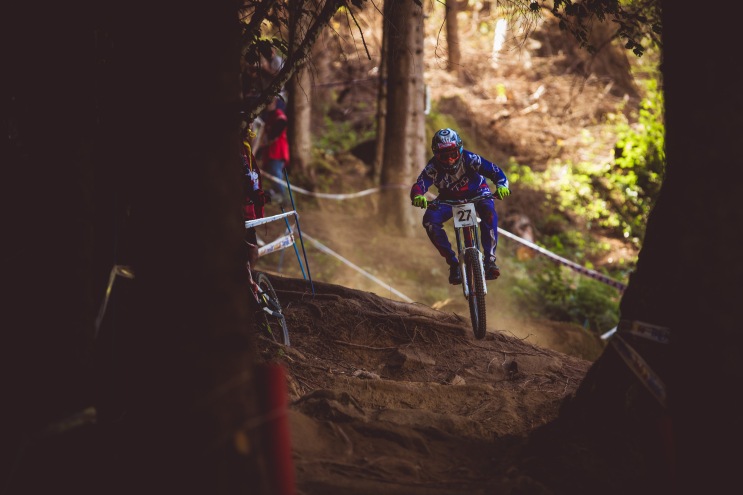 A huck-to-frame saw Adam Brayton scuff up his sick frame, but he was unscrathed. He didn’t seem affected by the incident, and kept on hammering out runs.

Tough day at work for the medical staff.

Never one to rest on her laurels, Rachel Atherton is riding with vigor and focus. She may have wrapped up the Overall a round early this year, but she knows World Champs is all about Sunday.

Benoit Coulanges catches some of the last rays of light in the early afternoon. It was a short day today, but we all appreciated the extra time to finish work and catch up with friends.

Riding with confidence and strong form, Jacob Dickson has his eyes set on a solid finish here in VDS – very acheiveable goal for young lad from The Green Isle. 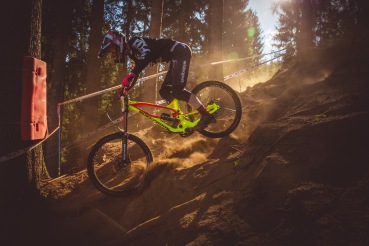 If it wasn’t for his Health and Safety approved colorway on his bike, we’d never see Charlie Harrison coming through the shadows. 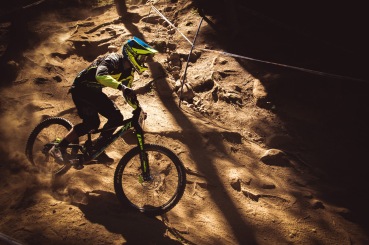 Eddie Masters was fighting the track a bit today. He seemed to wrap his head around it by the mid afternoon, and was back up to pace as the practice session closed out.

Ondra Stepanek overcooking the rocks – somehow he rode this out.

Laurie Greenland seems to hover down the track, missing all the holes and rocks – many of us look on in evny of his efficiency. 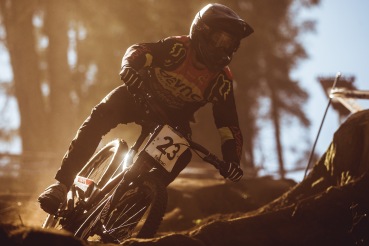 Pushing hard and getting wild frequently, Mark Wallace is on the hunt for a result here at VDS.

Yes, this was just as funny as it looks, and no, I can’t tell you why. #illuminati

You can hear the bike trumdling over the ground and feel the vibrations just looking at this photo of Henry Fitzgerald. 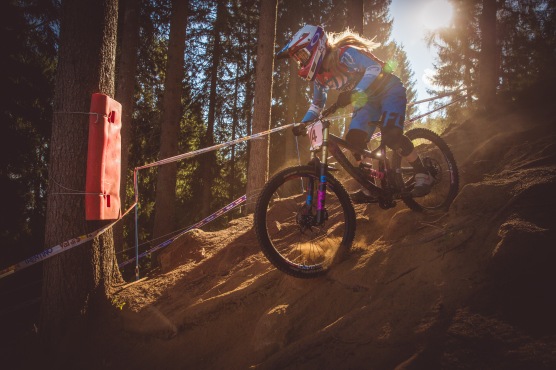 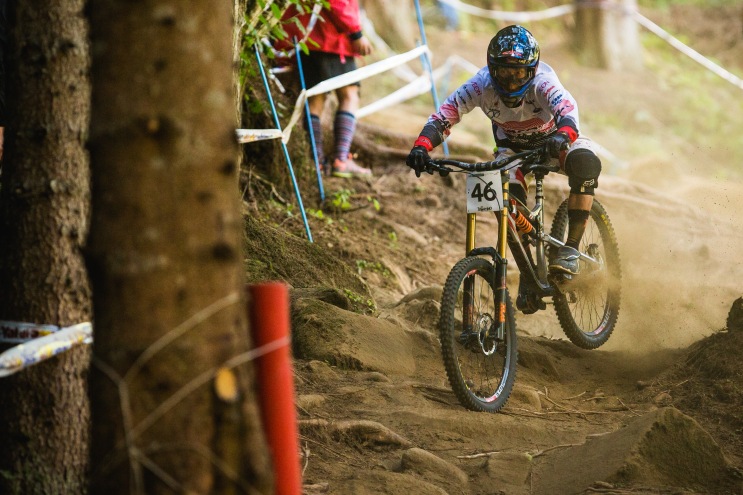 The eyes tell the story – Yuki Kushima off line and lining up the trees.

Braga Vestavik and his flowing VIking locks charged the track all day today. He took some spills, but the young Norwegian is made of tough stuff.

Just play, “The Safety Dance” by Men Without Hats when you look at this photo (he was fine by the way).

The annual offerings to Mother Nature were made during lunch today. This mother Wolf Spider was offered some food and instagram followers for a 2017 season of sunshine and warm weather. 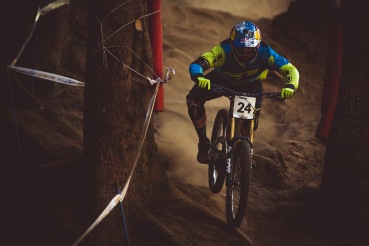 Man, Brook MacDonald was crushing it today in practice, putting down from serious pace through the roughest parts. Bulldog, commeth.

Turning up the heat today, Loic Bruni started turning heads with his line choice and speed. Betting pools will see some hard choices made regarding who to pick for the win.

She’s on a mission. Tracey Hannah, fiery-eyed and pinned.

When Greg Minnaar rides by, everyone watches.

Frikk Hess Bolstad has been riding noteably well. His results don’t seem to show for it, but from the chat we had, he’s still just trying to have fun and enjoy the experience. 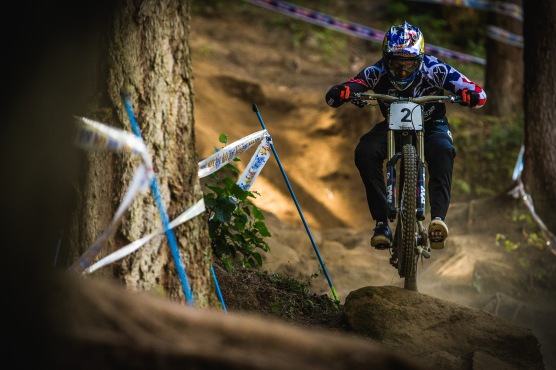 Aaron Gwin is the man everyone is watching after he won the Overall last weekend. He spent the day combing over every section, looking for precious time to cut out of his run. 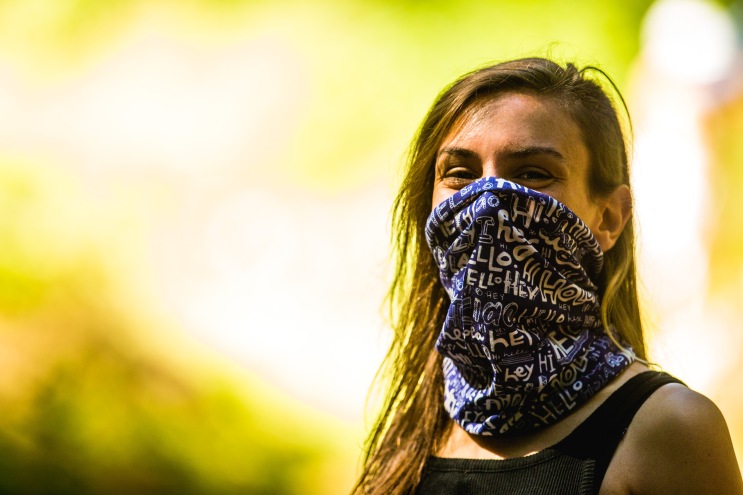 Manon Carpenter has quiety gone about practice this week. She has stopped to assess sections, and then gets right back to sending it – no time to waste!

One tough dude, Oscar Harnstrom hit the deck, hard, about a minute before this photo was taken. Horns up and ready to send it once again though! 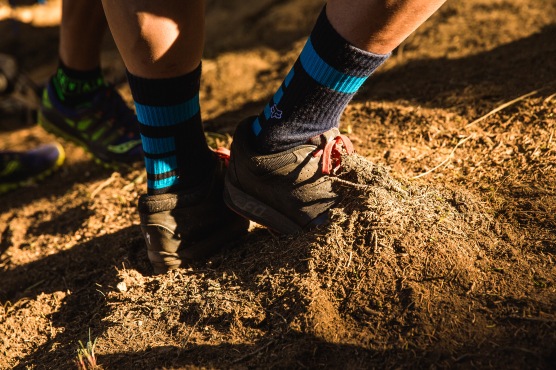 The surface conditions could be call, “Loose Granular”, if you want to talk in skiing condition terms. 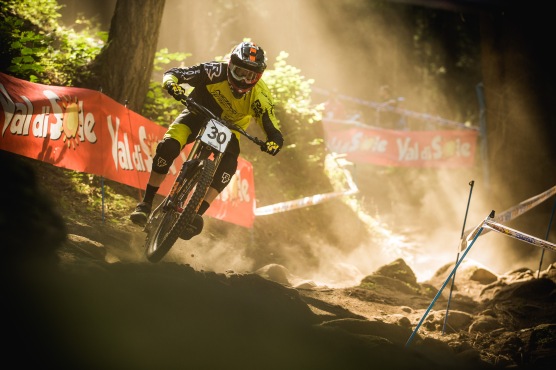 Sam Blenkisop has such effortless style on a bike, he makes even the roughest of tracks look relaxing.

Balancing work and school is a tough task, and to through in racing on top of that makes for a brutal trifecta. Despite the hurdles, Carina Cappallari still managed to move up from 11th Overall at the start of the year, to 8th! 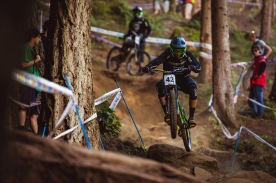 Jock Moir letting it run as teammate Dean Lucas looks on. The Intense crew were running hot laps together all day. 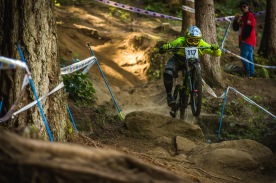 Looses Riding Of The Day Award goes to Roger Novack Vieira or Brazil. He seems to ride at 117%, all the time.

No flash, no fuss, just focus and fast. George Brannigan has been quitetly crushing it all week.