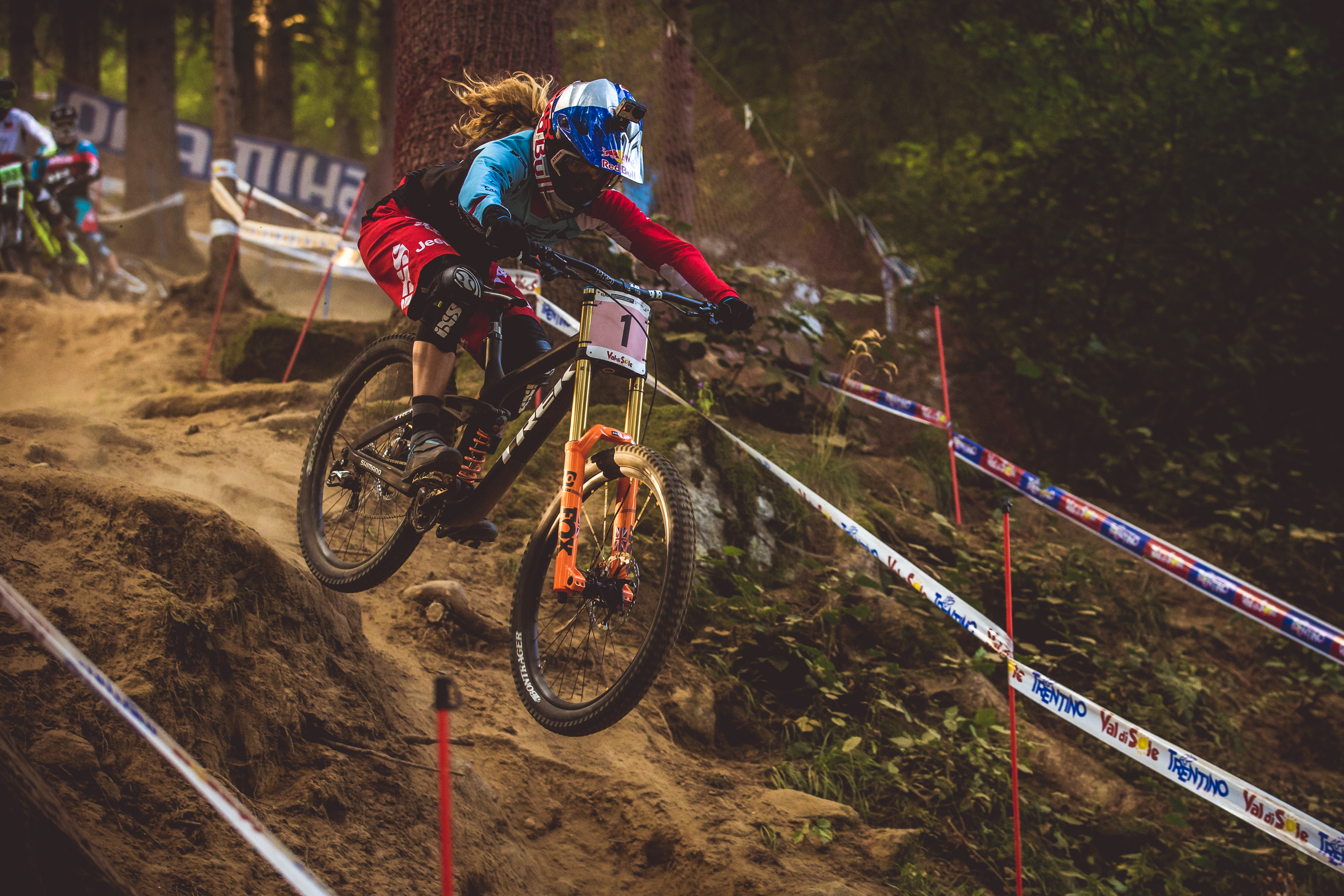 Today we finally got to see some hard times put to paper, and it was worth the wait.  The Elite Women have a legitimate battle for the top spot brewing between Tracy Hannah and Rachel Atherton – just .597 between them.  Junior Men saw a cool upset, with “local” Andrea Bianciotto taking the top spot in Seeding, a full 2.256 ahead of the field.  He would have seeded in 18th in Elite Men – just for a fun fact.  Elite Men saw a similar spread, with Danny Hart putting in 2.464 into everyone, but times are not really tight like we’ve seen before (in any of the categories).  The track has strong degraded, but the idea of it seems to be messing with riders’ heads more than their physical abilities.  It’s a daunting run from top to bottom, and then doing it as fast as possible without stopping is something almost cruel in these conditions.

The bench-racing is at a season high, with wild speculation taking place left, right, and center.  But as we saw during the regular season, the fields are deep with talent, and the number of riders that can win is at an all-time high.  It’s going to be a game of who can cope with the changes the best and make the least amount of mistakes – it’s not about who can go the fastest out-right here, per se, as it’s easy to override this track and/or bobble is the powdery and loose conditions.

Fair play to Bernard Kerr. He was given the alternate spot on the GB team yesterday morning, missing a full day of practice on Thursday. He was dilligent in his preparation via scouting on foot and GoPro footage from friends, and it paid off: 4th in Seeding, but going 2nd and 3rd at the splits…impressive.

Gaetan Vige has a determined way about him his weekend. 3rd and 2nd at the splits, finishing 4th, he is on the right track.

Just after I took this photo, Josh Button and I had a quick chat, and in answering the usual “How’s it going?” from me he said, “Struggling a bit…” Well, struggle or not, he got to work and tamed the beast for today, heading into Finals more confidently, hopefully!

Looking aggressive and inspired, Matt Walker is putting in hard effort with every run. Seeding in 5th after sitting out the last race in Andorra, he’s still looking to be a threat for a medal.

The lanky #77 has been on the move all week, and it’s good to see he’s consistent: Frikk Hess Bolstad, 8th place in seeding.

She’s pushing hard and charging on track, but Rachel Atherton is gong to have to dig a big deeper for time in Finals, as she only seeded .597 seconds up on Tracey Hannah.

Matt Lawton give the track-side foliage a quick cleaning.

“Did you get a shot of #44?!” – every media person after Andrea Bianciotto put down a heater of a run for 1st in Junior Men by a whopping 2.256 seconds…wow.

After getting carted out by a team of medics on Thursday, it’s great to see Finn Iles on track and racing. He went 1st at both splits, but losing some time at the bottom, he slid back to 3rd.

Junior, Oscar Perks, took a tumble in Seeding, but was unharmed depsite the wild nature of the off. He finished last, and thus will be the first Junior out of the gate tomorrow!

Back from injury, Veronika Widmann has been riding strongly all week – she even removed her own stitiches before Track Walk (she’s a nurse, she knows what she is doing). 8th in seeding for her efforts – solid return after a bit of time off!

He may have “only” seeded in 10th, but Greg Minnaar accounts for literally all of South Africa’s World Champs medals, and in doing so, put SA 3rd in the all-time medal rankings…G.O.A.T. for a damn good reason.

Sam Blenkisop kept the pace steady and under control today – will he uncork something for Finals?

Elliot Heap took a fair few run on track in Practice, and spent a great deal of time scouting the track during Elite Practice. 7th in Seeding, if he find a bit of time, he’ll be on the level competing for medals.

Jana Bartova likely found it difficult to hear Eleonora yelling at her to pull over with all of the horns and engine sounds blasting. Eleonora still went for 7th despite the hold up.

Always one to watch for, Benoit Coulanges seeded in 31st, but we know he can be inside the Top 20 without too much hassel.

Prediciting how Aaron Gwin will do in Finals base on the preceeding days of riding is kind of like predicting mountain weather: you have no idea what you’re gonna get until is already happening. 6th in seeding, but honestly, who knows because he was the fastest rider past me…

Backwoods chess is on the up-and-up here in Northern Italy.

From 19th at Split 1 to 5th at Split 2…Remi Thirion seeded 5th and is thus keeping things interesting for Finals.

After a really rough time in Andorra, Tahnee Seagrave has grit her teeth and gotten down to it here in Italy. She seeded 5th, but we know that’s not what she has in mind…fuel for the fire.

The mornings in Val Di Sole are pretty spectacular.

He must have had the most insane final sector, as Nik Nesteroff seeded in 2nd, but went 9th and 6th at the splits. That’s pretty wild.

I’ve been saying it for a while now, and the split times tell the tale: Magnus Mason is on the rise. 2nd at the first split and 4th at the second – if he cleans up the last sector of the track, he could easily finish higher than his 6th place in seeding.

They are actually talking to each other. #21stcenturylove

It has been a minute since Nick Beer has had a big result, but he going 1st at Split 2, means he’s perhaps back into the groove of a few years ago.

Looks like Loic Bruni has put the regular season behind him, and is focused in on World Champs. He’s the reigning king at the moment, and considering he seeded in 2nd with 5th and 4th place splits, he’s the one to watch in Finals.

When your nickname rhymes with “Huck”, you’re bound to be a sender – Charlie Harrison boosting into 20th in seeding.

Fancesco Colombo is a super nice dude, always smiling and stoked – he is also a madman on a bike. 21st in seeding for the “local”.

“Jacob Dickson is looking ridiculously fast, and doesn’t even seem bothered…” – over heard in the media room. It’s true, he’s on it, and 36th in seeding is further proof.

Amaury Pierron was 7th at the first split, but had some issues, going 47th at Split 2 and ending up 103rd. He’ll be one of the fist Elite Men to race tomorrow, which could play in his favor.

80th for #80 – Mauricio Ernesto Estrada Pulgarin is reppin’ Columbia this weekend, but can be found tearing up the Eastern US during the regular season.

After an outstanding year, on a new bike and team no less, Greg Williamson is being hailed at the top wildcard for Sunday.

I’ve know Neko Mullaly for years, we grew up racing together. He’s had a tough go this season, but here at VDS he is looking fast and confident as ever. Goes to show what enjoying a track can do for a rider. 25th in seeding

Launching into 1st in seeding, Danny Hart put a big 2.464 seconds into the field. Sunday is going to be ridiculous.

There is defintely a punch line about a mountain bike rider from a country that is mostly below sea level…Tom Bersselaar making his own “Jamacan Bobsled Team” dream happen!

For all of the captions written about Brook MacDonald smashing the track to bits, he sure was riding smoothly today – no joke, one of the most fluid in fact. 12th in seeding and the fasted Speed Trap for Bulldog.

This is what focus looks like; Miriam Nicole isn’t here for a participation trophy – 2nd and 3rd at the splits, seeding 3rd, she is clear of 4th by 1.2 seconds, but will need to 9.760 seconds if she wants to win.