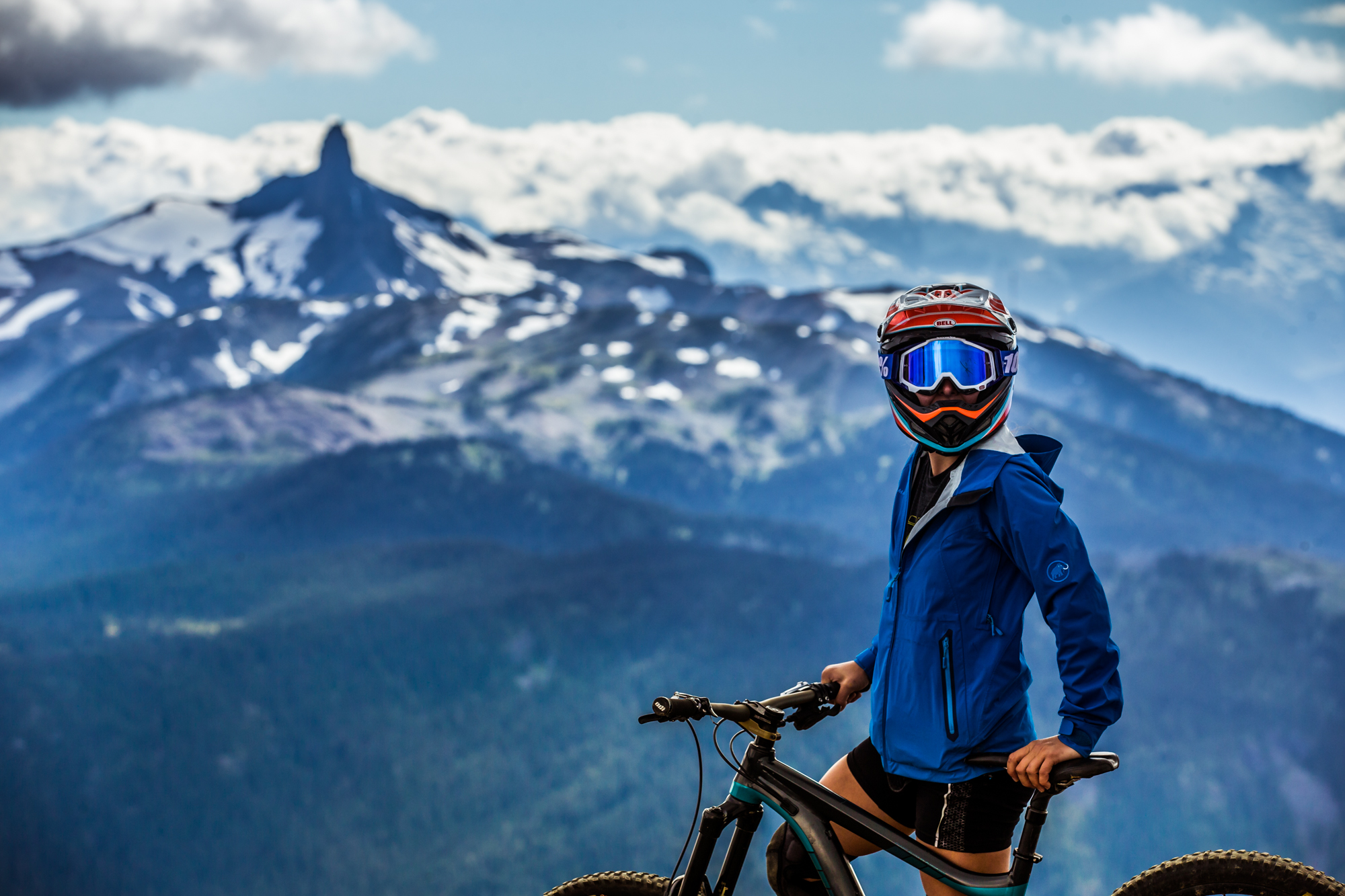 It’s been a ten-year-in-the-making journey, but in 2016 I’ve finally found my way to Whistler for Crankworx.  The hype has been deafening, the stories unbelieveable, and the photos stunning.  A part of me knew that if I went at the wrong time in my life, I might just never leave.  Hedging on that bet, I waited until I had a “work opportunity”, giving me an excuse to pack my bags and bike, and finally visit the ultimate bike playground.  Flying in over the Rockies, I knew I was headed somewhere special, and the ensuing drive up the Sea-To-Sky highway only confirmed that.  I spent a week riding, shooting, and soaking in the whole scene.  It was well worth the wait.  On the final day, that’s when the big vision of the trip truly came together:

We’ve only just gotten off the Garbonzo gondola, and already the shenanigans have started.  I’m laughing so hard, I’m having trouble staying on line as I’m chasing Jo down to the Top of the World lift.  She left her jacket unzipped, and it’s billowing out around her like a cape, she looks like a superhero on a bike, chasing after some bike bandit.  Getting onto the lift with her and Josh, I relay with story with a dumb grin; luckily it’s just as funny to them.  As we’re sat on the four-man seat, climbing up the steep cliff face to the very top of Whistler, the three of us marvel as the truly majestic view spreading out over our shoulders.  A comment about being a little nervous-but-excited strikes a chord, and we all grin ear-to-ear while taking selfies, being overly careful not to drop phones and cameras alike.  I personally hadn’t been this excited to ride in a while.

At the top, we gather at the iconic cairn with the other three in our group:  Cody, Sami, and Lear.  More selfies, more photos, and general awe take place – it’s all paused when Josh decides to make it a dual-sport day, and climbs up to the top of the cairn…this is why we can’t go anywhere.  This spectacle takes a few more minutes to resolve, as tourists gather and he has to figure out how he is getting down; spoiler, he isn’t still up there.  One final group selfie, and we jump on the bikes to get to the trailhead.  I of course have to stop to shoot the field of mini cairns, but thankfully this little adventure is more about smiles than miles; no rush.

After one last photo shoot posing with bikes and giving the “thumbs up”, Cody and Sami take off and get into the ride.  They opted for DH bikes, and that was the last we’d see of them until the remaining four of us arrived at the top of the Creekside lift about 45 minutes later.  As their helmets faded over the ridge line ahead of us, the rest of us drop in, and immediately start having the best day ever.  There is something particularly enjoyable about riding a really fun trail in a beautiful setting; it’s a sublime sensation.  Josh and Lear alternate leading out, I caboose it and chase Jo down the rocky radness.

We stop here and there to regroup and exchange hoots and hollers of happiness.  The light is firing for photos, and the ground is in prime riding condition.  After descending down above the treeline, we cross over into the trees with the echoes of a hawk’s cry somewhere nearby.  The rolling trail, the views, and the group dynamic have me smiling a mile wide, making happy sounds, and generally loving the moment.  Jo and I had never ridden the trail before, so she is hitting everything blind going quick – we both have a few moments, which are accompanied by exclamations of surprise (most of them family-friendly).  We all would later remark that racing down this track for the Enduro World Series is a feat of madness – good work to all those who took on that challenge.

A few extra photo stops meant that the trail patroller who was sweeping after the lift shut caught up to us, much to our amusement, but not hers.  She was patient as we hustled down and tried to chase the light, as well as each other, without ending up off-piste.  Blasting out onto the fireroad to finish the run, we stop to reminisce about how fantastic of a decision it was to go for one last group ride, off the very top.  It was perhaps one of the best Mondays ever, and we all were reveling in finishing out the week of Crankworx antics on such a tremendously high note.  This week in Whistler started out as a work venture, but ended with friends-for-life and enough amazing memories to satiate even the most boring of moments for years to come.  What an unreal experience, I can’t wait for next time.