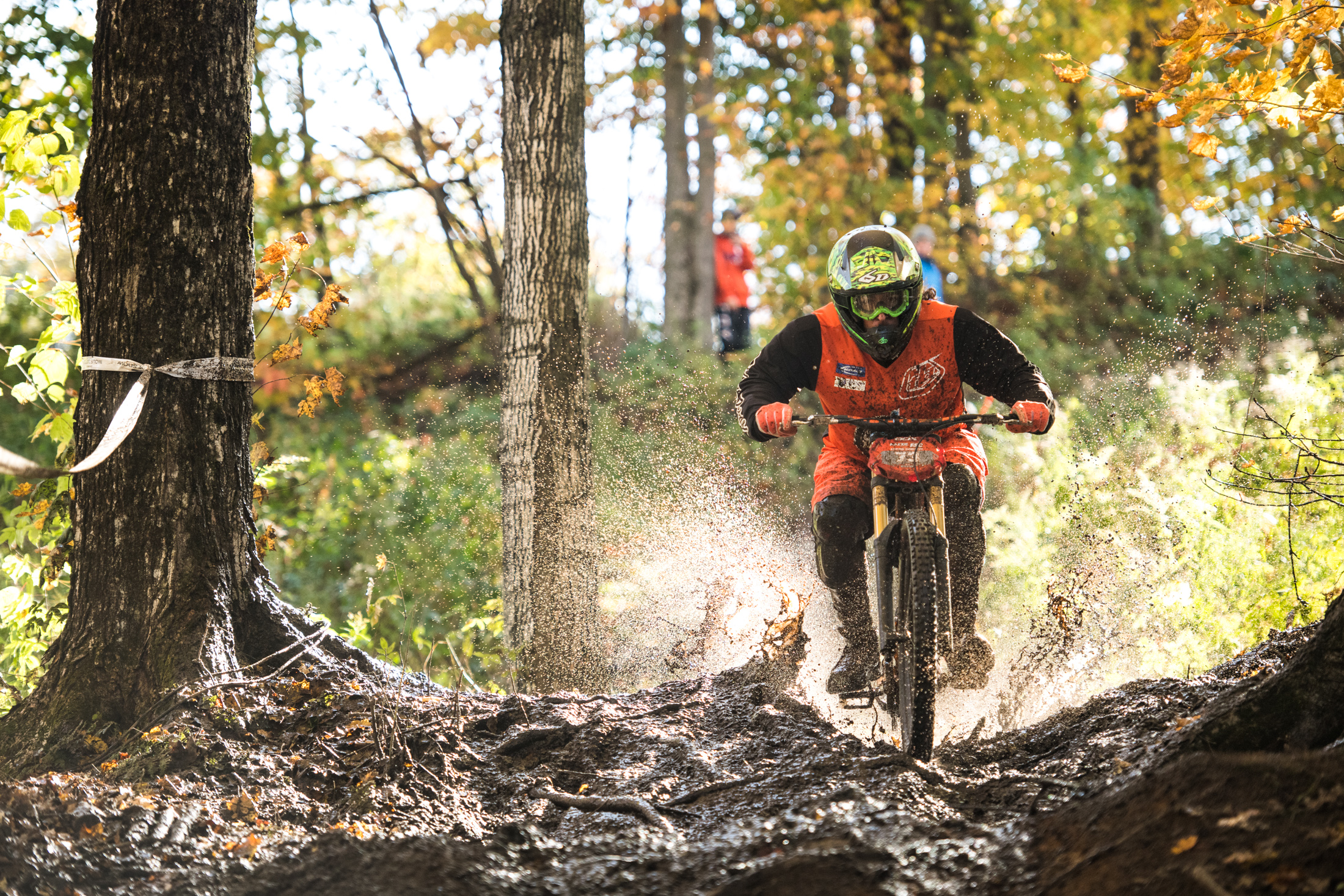 Definitely don’t call it a comeback. Just putting it out there…

With that said, I was finally able to make good on a goal from this year and get back between the tape. For the first time since 2015, I entered and competed in an Elite Men’s DH race (a.k.a. the Pro Open in the Eastern States Cup series). It was also my first time racing at Mount Snow in Vermont since 2008 – the last time I was there I was being handed the 1st Overall in Junior Men trophy from the mountain’s race series, a once-premier series in the North East.

The infamous Scotsman huck from the 2015 ESC #8 at Plattekill. PC: @jebphoto

Talk of my return to racing entered into the conversation in April, soon after I returned from New Zealand. A change of pace on a personal and professional level in 2018 was underway and feeling quite capable on a bike, I thought why not. I tried to give it a whirl twice but didn’t follow through, first due to weather/power outage issues at the venue, and the second time due to timing issues – they ran out of transceivers. Basically, I ended up with a few days of practice getting back into the race routine and then going through the motions leading up to taking a race run. I think these false starts were helpful, as it takes time to find that place mentally in which one can execute on the preparation. It’s one thing to do a track walk, pick lines, ride lines, etc etc; totally different doing that for one run under time.

First race attended in 3 years, with the intention to compete. Saturday practice, May 2018. A power outage canceled my race: there was no Sunday practice, just a race run (which I wasn’t into because it poured overnight after a dry day on Saturday), which meant we could get our entree fee back if we chose to not race. PC: andrewsantoro_

I’ve been shooting and writing about racing for about 4 years now, so it was hard to put the story of the weekend out of mind and return my focus entirely to me on a bike, racing. Something a lot of people don’t realize, about me, is that racing became increasingly stressful over the years, to a point where I wasn’t sleeping (among other struggles), and not just on race weekends. So, committing to racing at a venue I have a lot of history with, along with the unknowns of being out of the tape for a while made for a potentially heavy time. Thankfully, in the past few years, I’ve learned to manage the stress and anxiety I used to be overwhelmed with, not to mention I’m fitter than ever and finally on a bike that fits me. Furthermore, I was hanging out with all my friends and having a hoot with all the hijinx and shenanigans – it was just like the glory days! So, on a whole, the sum total of a lot of strong positive elements was on my side.

A familiar feeling: back between the tape on a classic gross, open-slope Mount Snow track in mid-October. PC: andrewsantoro_

Ironically, once Saturday practice rolled around, I reverted to my ways from the early days of racing in Jr.X (in terms of my approach on track): no track walk, just a sight-in lap and two race-pace-ish runs with some pauses in places. This “method” totally goes against my better judgment and knowledge of how to prepare, but the track was 2/3s a mud pit and everything else in between was straightforward. I didn’t want to walk through a marsh for an hour in 40-degree temps and then ride through the same muck all day…I could do one of those two things, but not both. I took minimal runs because I was dealing with some severe body aches and the weather was on-and-off raining, so I didn’t feel the need to over-do it when things weren’t getting any faster or slower on track and lines weren’t changing significantly. In turn, I socialized and just enjoyed being back at the races with my friends, actually participating and talking shop, not just sitting around and talking shit.

The photos show the comfort and proper fit I feel with this new race rig; interesting to see it from the other side. PC: @veksenn

The term, “Party Pro” is pretty much how I fit into the Pro Open field at this point; it’s just about the fun of the event and the stories. On Saturday night we watched the Monster Energy Cup where Eli Tomac took the triple-race-win and a million bucks, so the stoke factor going into a sunny and warm(er) Sunday was high; I was keen to get into things. I budgeted my time decently well and set out for pre-race practice with about an hour and a half left – I wanted to scope some lines and see how the track had degraded through the morning. I was in the only sort of sketchy section, a muddy rock slab when someone on the side of the track said there was 7 minutes left in practice, not ideal considering I was halfway up the track and still had a section to check out. Time flies… So I ended up taking exactly zero complete runs before my race run, having only looked at my race lines. Classic.

Sunny Sunday, casting its rays of encouragement. The single ride-through of the track I managed before Finals. PC: andrewsantoro_

I did not miss the race nerves, the cracked-out butterflies that rage around for the two or so hours before a race run. It’s a nervous energy that is still unmatched by anything else I’ve done. In an effort to calm down the flurry of feelings, I tended to the fire we had in the pits and cleaned my bike, which definitely helped put my mind at ease, which I’m glad was actually effective. It’s funny how it was just a fun little regional event, but it felt like I was going to be dropping in on a live broadcast – that ought to give some perspective of how big of a deal I felt this endeavor was, there was a lot of years of history to shake off and move past in order to suit up and get down to business.

Keeping warm and dry as possible was crucial…so was staying focused and not getting overwhelmed by nerves!

As the time to race the clock approached, I headed to the lift with Jack and Oliver where we ran into an old friend/teammate of ours, Mark, whom we hadn’t seen in years. It was really great to briefly see him, he was up hanging out and spectating with his kid, whose middle name is “Awesome”. After some reunion high fives, the three of us then shuffled onto the #50 chairlift which is painted gold, and the prerace buzz really kicked in. With the sun shining, blue skies all around, and the gentle golden hue of the autumn leaves spreading out across the hill, it was a beautiful day to return to racing.

The view from the top, just before dropping in for my race run.

All the preparatory training, bike wrenching, and riding is useless if you can’t get your head in the right place for a race run. This is a big worry I had because really, you don’t know if it will all be ok until you’re doing it. I felt I was in a good place mentally and the last race of the season, at a familiar mountain, seemed like a good place to test my mettle. As I got called into the gate I was still strongly feeling the butterflies, but instead of battling them, I just let them flutter, took some breaths, and focused up…

Race run intensity; I came into this section totally out of sorts thanks to a weird bounce on some slick rocks. Covering the rear brake just in case it seems! PC: @veksenn

Coming in hot! Dropping in towards the finish in Finals. PC: @andrewsantoro_

The final huck before the sprint! PC: @jackiericecakes

Landing of said huck…it was quite flat. PC: Bradford Herder

A play-by-play run isn’t needed (and I thought it was too muddy to run a helmet cam), but the important stats from the start to finish go like this:

To have people come up to me after the race, unprompted, and tell me it was great to see me back on a bike and looking really good on track meant the world. Not that I was going to make a fool of myself, but there is always lingering doubt when trying again. Crossing the line I thought two things: “Nice, a clean run!” And, “That was fun!”

Done and Mudded! 13/22 on the day, not too shabby! PC: @jackiericecakes

Having a positive takeaway from the weekend which had a big question mark hovering in the background was a bit of a relief. I’ve shown up to hang out in the pits on occasion in the past few years, but to finally get in the mix was much needed and really enjoyable, something that I wasn’t really expecting to feel if I’m honest. Time away has perhaps reinvigorated my interest to rejoin the circus. It’s officially the off-season now, but what a way to finish out the 2018 season!

It was Dylan Conte’s birthday, so his dad, Richie, brought a cake for after the race. It was an excellent post-race celebration for many reasons.

A visual representation of the results spread. Via: @rootsandrain

The actual results. Via: @rootsandrain

A little history… Via: @rootsandrain

The Shred Sled, post-race, at home, after it rained overnight while it was still on the bike rack:

One thought on “Racer Ready…”