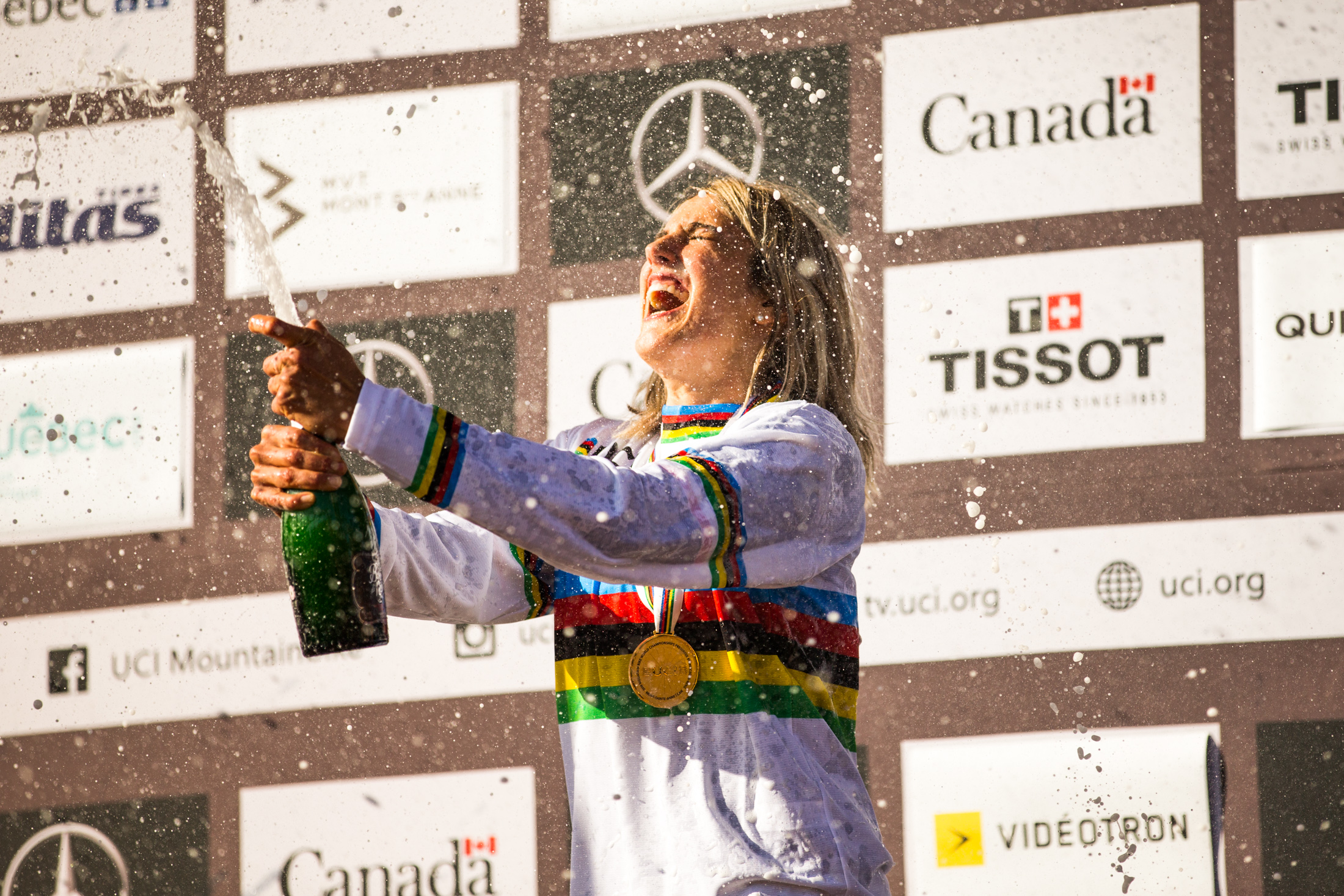 DownhillWorld Championships is boring right up until it’s not. The whole week leading up to the one run that matters is spent puzzling and preserving, mind, body, and bike. A glimmer of what riders are capable of shines through in places, but there is never a full picture, especially when qualifying happens in the rain. The usual suspects looked as good as they could, while the underdogs and random heroes showed signs of interest, but for the most part seemed to be content with participating and just enjoying the experience/exposure of the event.

In a book, there is no pretense to something big about to happen, you’re just reading along and then BAM, the Red Wedding; a strong comparison, but that’s how World’s feels. Practice, even the morning of, just happens – a few notable hucks or wild moments, but on a whole, just a day on bikes by the looks of it. Come race time though… a beast is unleashed, riders uncage their race pace and all bets are off (or on, Pete Rose?). The feats of commitment and athleticism on display across all four categories is a spectacle even the most jaded Industry Insider could appreciate.

The pressure of a one-day-winner-takes-all race isn’t for all riders, while others thrive under the circumstances. Those who are steely and perfectionists are often the victors, taking the exact amount of risk it will take to hold pace and stay ahead of the clock. There will always be Wildcards, one or two particular runs which are memorable and in the highlight reel. The winning run takes balancing chaos and precision, a Hail Mary of a run lacking the latter. This weekend, a clinic was put on by the Gold Medalists. Tenacity and grit shone bright, the crowd being treated to exemplary winning race runs.

Being expected to win is a heavy weight on any athlete. Vali Höll isn’t just any athlete though – she is a force of nature, with such focus and talent that is needs to be seen to have a hope of understanding. Winning by 12.982 seconds isn’t considered an anomaly any longer, it’s the standard, which is madness. Her speed has its own aura, there is something considerably different about her as a rider when you see her on track. For her to win, while expected (some believed it to be a guarantee), was still nothing short of brilliance astride her ride. Taking an entire sport’s belief in one’s ability and confirming it in a single run as a Junior, shows that this is only the beginning of what she can grow into as she moves up to Elite for 2020. Fair play to Vali for another monster win and a second set of stripes.

On the other end of the spectrum, there lays the underdog, the person who is knocking at the door, their time in the limelight sure to come soon. Junior Men is a category rife with on-the-cusp riders, the ones who are speculated as someone who could be The Next Great, “they just need to _____”. Kye A’hern has been stood in waiting this season, that top step eluding him once, only 1.963 off of the win. In a category known for very “checkers or wreckers” kind of riding, Kye remains consistent as a Top 5 rider, not known for finishing outside of the Top 10 even. Many said he’d be one to watch at MSA, being a big guy and a smooth rider, as the track calls for a more refined style when possible. Such commentary would prove wise, as the young Aussie showed consistency top to bottom and managed his run with aplomb. Smart riding is most often winning riding.

When a season elapses and three of the best riders in the field are absent for all or most of the summer, it creates a lot of questions about what that will bring in terms of new competition and rivalries within the category. An even bigger void is created with the defending Champion is unfortunately not able to defend her stripes. In a positive way, the regular season has carried on with tight racing and exciting outcomes, which has been great to see. Historically, World Championships always have a different storyline, especially when two of the three missing riders return, but with unknown levels of readiness. The Elite Women were seemingly under more severe scrutiny than Men’s, as Tahnée Seagrave and Myriam Nicole returned to racing, but were visibly conservative in their riding. Meanwhile, Marine Cabirou and Tracey Hannah were carrying on their usual ways, up to speed and riding like, well, they’d been racing and winning all season. As we all know though, never count a returning racer out – only time will tell how they able to measure up. As riders were on course during the race, all bets were off, no one was willing to make a firm call as to who the victor would be, especially due to the fact that the starting order was all over the place due to a very relaxed Qualifying race in which all racers would make the big show. Myriam was the 11thrider on track and would end up sitting in the Hotseat for 14 riders. With the two favored riders, Marine and Tracey, the 24thand 25thriders to drop, the suspense was palpable. The moment it was realized that Myriam had won was truly emotional and special, a true come-back performance, one of a thoroughbred champion. It was an amazing display of racing, one not soon forgotten.

French dominance of the Rainbow Stripes is legendary. François Gacht started the trend in ’94 at Vail, and then Nico Vouilloz went on to win ten between ’95 and ‘02, a number surely never to be outdone; he was only ever beaten by Miles Rockwell in ’00 at Sierra Nevada.  Fabien Barel then took two in a row, ’04 and ’05 at Les Gets and Livino. Loic Bruni brough back the Stripes in ’15 at Vallnord, a turning point in his career – having still not yet won a World Cup event. He flatted in ’16 at Val Di Sol, but since then and now again, Loic is the World Champion… three years in a row, ’17, ’18, ’19; Cairns, Lenzerheide, Mont Sainte Anne. His new total of 4 wins makes him the second-winningest World Champion behind his countryman, Nico. Loic is the new generation of racer, using all the technology possible and decades of wisdom of the people in his corner to produce results. Calculated would be understating his approach, it’s scientific, with data telling the tale and dictating the proceedings. Only fellow Champion, Nico, was able to capitalize as aggressively and successfully upon the use of data and design. There is racing, and then there is what Loic and Jack (his mechanic) are doing. The Loic Bruni era of DH is one in which every possible option is considered, looking for time to be gained through all means possible. Nico was The Alien, now we have Super Bruni – a nickname befitting of a Champion indeed.