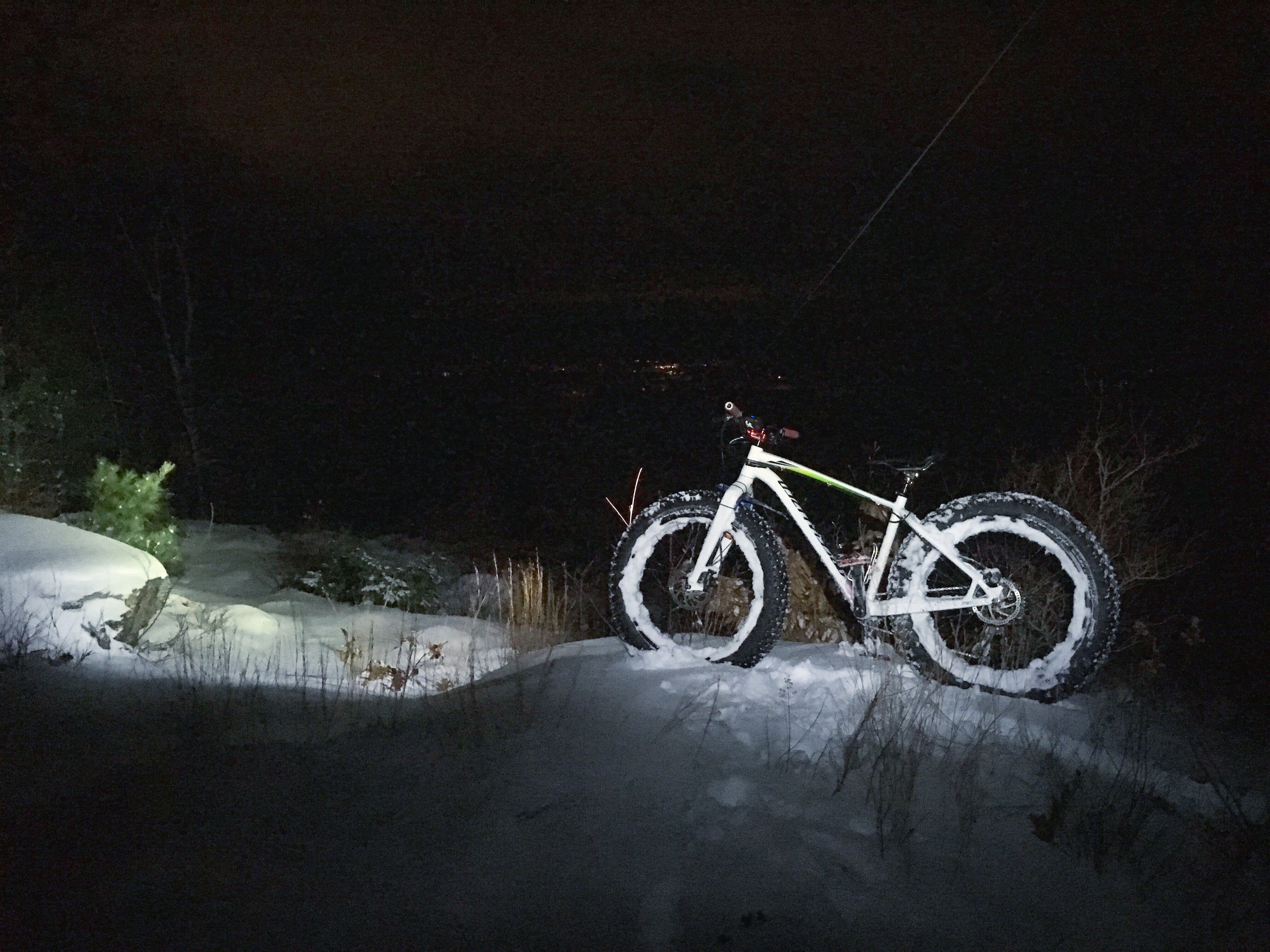 Icicles on my bicycle. Fun to say, but the conditions that lead up to that point are questionable at best. Riding through iced-over puddles, the front wheel like the prow of a ship charging through early winter seas, the ensuing descent instantly harrowing as the realization of having literally frozen calipers takes place after cresting into the gravity-fed section…Autumn riding in New Hampshire sure is a treat!

That was the last normal ride of the year, a ride in which we had to ride back to the cars via the logging road instead of the usual descents, thanks to the aforementioned lack of stopping power; a hilarious, though lack-luster closeout to what was a wonderfully fun and friend-filled summer. We were all hoping for a slightly longer, well, regular-length Autumn, as we didn’t get and Indian Summer, and the shoulder season, all one month of it, was mostly rain. Welcome to the new Age of ManBearPig.

I can’t remember the last time we had snow on the ground, which was sticking and staying, in the second week of November. I was literally doing trail maintenance two days before we started Winter, which wasn’t due for at least another couple of weeks – but here we are… Fat Season is upon us. I have been mildly dreading the end of the dirt season, as it would mean the Cold Times were ahead. I revel in the cold, but I think it’s safe to say we’d all rather ride in warm weather on dirt.

Fat Season is not a comment on binging Netflix and snacks, I’m of course talking about Fatbikes. Possibly more controversial than E-Bikes, the mammoth rigs plod along like beast of burden, crawling up the snowpack in an effort to help their passengers forget that there is approximately 5 months of this to go. The days are short, the nights are long [so.long.] and the happiness in people’s eyes seems to stymie continuously until December 21st, when the sun stays up a little longer each day, and we are over the hump heading back towards the Days of Dirt.

With ailing knees and a feather-light wallet, skiing is no longer a truly viable solution to the Winter Lull. I personally take solace in climbing aboard my would-be-wooly beast wearing an Ogre-level number of layers and setting off into the mist, the mist I’m exhaling and need to outrun so my glasses don’t fog up. The peace and quiet that Winter provides with its great white blanket is a feature of the season I relish, the other seasons of the year tend to have a timid hum at all times, what from the bird and insects, to the little furry critters jostling about in the brush and sticks. The light crunching of the snow under the enormous footprint of my metallic Pliocene-epoch steed is all I hear as I grind aimlessly along through the woods, which is a lovely cathartic relief.

Unlike the time in which the shaggy grandpa elephants roamed the lands, we have easily-portable light. Night riding is a game-changer, considering the darkness sets in heavy about 4:30pm every day until early January. Having lights mounted up brings a whole new world to light, pun intended, and kicks the window of opportunity to ride wide open. And with snow being a giant reflector, visibility is better than Dirt Season night riding, which is appreciated. Having an expanded range of riding hours when it is needed most is without a doubt a huge boost to moral, keeping spirits up and moving instead of channel surfing and grumping.

The snow-laden trails give new character to otherwise well-worn paths through the woods, providing a different experience and perspective of normally familiar places. The pace is different, as is the technique, an aspect that appeals after the usual lap around the local spot starts to feel rote and rehearsed. I do find myself questioning if I can better the performance of the rigid air ship, but I always talk myself out of more credit card debt with the reminder that, it’s a snow bike, nothing more, and in these months, simple is better. Fat and Rigid it is…like the GOP.

Atop the metal mastodon, keeping active is more enjoyable, a paramount factor to keeping sane in the Winter. Keeping up on cardio means beach season is always a little closer, and come Dirt Season, the first third isn’t spent trying to find form after a couch-themed off-season.

They are goofy, sure, and the antics on trail don’t look stylish or “pro” – but the fun-factor is topnotch, and the new variety of places to ride and nuanced riding styles to employ, like counter-steering on a climb, keep things just interesting enough to trudge on through Winter with a little extra sparkles in one’s eyes with a vigored drive to get outside in weather that is usually deemed “too fucking cold” for the average citizen. We laugh and steam billows from our faces, because we know the key to having fun in winter doesn’t mean spending three-digits on a day pass, waiting in long lines, and tag-team wrestling to get a table in the lodge at lunch time. Unlike the Woolly Mammoth and it’s predecessor the Mastodon, the Fabtbike isn’t going extinct anytime soon, for which I am certainly happy.